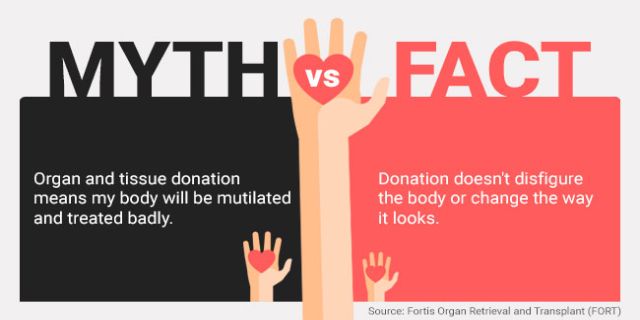 New Delhi: The health panels of Confederation of Indian Industry (CII) and Young Indians (Yi) which was formed by CII in 2002, are conducting an explorative study on “Myths and Misconceptions about Organ Transplantation and Tissue Donation”, among the residents in the city of Coimbatore, Tamil Nadu. Till now the survey has been conducted among 1,117 people (394 females and 723 males) in 33 out of 100 wards in Coimbatore in August 2018. S. Shrikumaravelu, chairman of Yi’s Health vertical in Coimbatore said, “The aim of the study is to know the gaps that still exist and what more is need to be done. For example, everybody knows about eye donation but a donation of organs like skin, pancreas, hand, bone marrow is very new to them.”

An interim report of the study, that will be completed by January 2019, was released recently at the fourth edition of the ‘Gift an Organ’ initiative which was launched in 2015 by CII and Yi in Coimbatore, along with 12 partner hospitals, with an objective to create awareness on Organ Donation by educating people and breaking the myths related to it. The initiative has now spread across 42 cities in India.

The study is being conducted with an objective to evaluate and streamline the efforts under CII-Yi led ‘Gift an Organ’ initiative and to identify, document and scrutinise the prevailing myths and facts relating to organ donation among the general public in Coimbatore, Tamil Nadu. The interim report found that even though people are aware of organ donation per se, there is a low level of understanding of various aspects of organ donation and transplantation and says that print media/newspapers are the biggest sources of information on organ donation for people followed by information from friends and colleagues.

Though a large majority of people know about organ donation, they do not know the logistics and procedures for organ donation. Many times, people have a false belief that the brain-dead patient will recover one day. Many people lack clarity on the difference between coma and brain-death. A person is declared brain-dead after some tests and that done by a panel of government doctors in compliance with the Transplantation of Human Organs Act.

R.V. Ramani, convenor of a CII-Healthcare panel in Coimbatore and the Project Chairman of ‘Gift an Organ’, said, “The Tamil Nadu Government, in 2008 passed orders laying down systems and procedures for organ donation and transplantation in the state and the state is also the Regional Organ Tissue Transplant Organisation for southern states. At this juncture, awareness among people on the concept of organ donation is crucial.”

Also Read: A Proposed Common Waiting List Of Organs Available For Donation Has Resulted In Differing Opinions In Tamil Nadu

While a vast majority of the respondents (64 per cent) were of the view that consent from the family was absolutely essential for organ harvesting, 73 per cent had a clear idea that their religion would never restrain them from donating organs. A vast majority of the respondents had knowledge about TRANSTAN (Transplant Authority of Tamil Nadu), the state level apex body and regulatory authority in Tamil Nadu for organ transplantation.

People in Tamil Nadu are very much aware of organ donation. However, there are some misconceptions among people like fear of disfigurement and this is our biggest challenge. This is the reason we keep conducting so many awareness building programmes all over Tamil Nadu. The programmes focus on letting the people know that the donor will not be disfigured. For example, many people are scared of donating skin because they fear disfigurement but we need to let them know that when skin is removed for donation, it removed from the back and under thigh, it is not visible and heals back to normal in due time.

She added that Tamil Nadu is the forerunner in organ donation in the country when it comes to organ donation and it is because of the awareness among the people since organ donation is a voluntary act. “Organ utilization has improved tremendously in Tamil Nadu”, she said. She informed that in this year, till the month of September, 82 heart, 103 lungs, 93 liver, 191 kidneys, 157 corneas, 22 skin, 2 hand, and 20 bone transplants have been done. In the year 2017, the total number of organ transplant was 943 which was a little less as compared to 1065 in 2016. Between the year 2008 and 2017, a total of 6035 organ transplants have been done.

“The unity and cooperation extended by the private hospitals for cadaver organ harvesting and transplantation in Coimbatore have been exemplary,” Dr. Kanithimathi said. She added, “I have witnessed some very moving instances of organ donation in Tamil Nadu. A 12-year-old boy’s parents donated six of his organs once they found that he was brain dead. Those parents were from a remote village and were not educated but they understood organ donation and wanted to donate where he was admitted. The hospital, though a big hospital did not have a licence for organ transplantation as they were not conducting any transplants in that hospital. So when the ICU doctor contacted me, I spoke with the parents and found that they were really willing to donate their child’s organs, we made arrangements to provide a temporary licence to the hospital.”

Also Read: A Dismal Setting For Organ Donations In India

Dr. Kanthimathi asserts that in many cases the family of a patient, who has been declared brain dead, refuses to donate heart due to the attachment with their loved one. She said,

We have ‘grief counsellors’ who talk to the families during their time of grief and try to convince them to donate organs in order to save other families from experience the same grief. It’s not just one person of the family who takes the decision; the whole family needs to be convinced to donate.

Through focused group discussion and informal interviews with 16 transplant surgeons/ physicians, five hospital administrators (deans, directors and Head of Departments), two intensivists and three coordinators, who directly deal with the donor and general public, it was found that major issues related to conflict and willingness to donate organs are misconception about the sale of organs, illegal organ harvesting, and difficulties in convincing the donor family and lack of trust towards hospitals and doctors. The doctors also pointed out that the delay in declaring brain death and delay in getting documents are also major hindrances that cause irreversible losses in acquiring and using donated organs.

Mr. Ramani said, “Lakhs of people die every year who could have been saved with the help of organ donation. We need Government, hospitals, civil society, media and the youth to come together for building trust among people by making them aware about organ donation laws and rules. The Transplantation of Human Organs Act (THOA) and its Rules and establish a framework through which organs could be allotted in a fair manner to the potential recipients that await organ transplantation.”