With 4,938 organs transplanted in the past eight years, Tamil Nadu has been leading the nation in organ donation by way of example. It didn't achieve success on this front overnight. Here's a look at how public policies and public support propelled the cause. 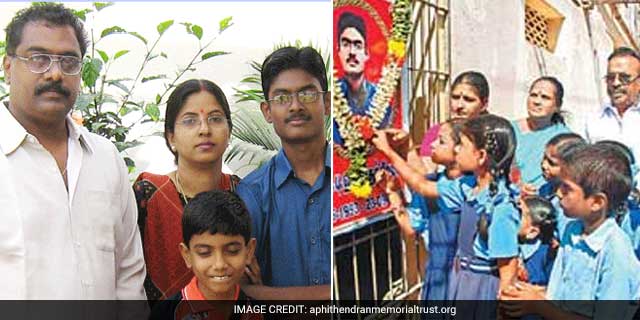 Hithendran was 15-years-old when he met with a fatal accident. His parents donated his organs and helped raise awareness on organ donation.

New Delhi: In the last 8 years, a total of 4,938 organs have been transplanted in Tamil Nadu, according to Transplant Authourity of Tamil Nadu (TRANSTAN). The southern state is the first Indian state to make certification of brain death mandatory, successfully create a green corridor to transport an organ, and make conversations about organ donation mainstream.

So how did such a major turnaround occur in just 8 years?

In 2007, Tamil Nadu was rocked by a massive kidney scam. In its immediate aftermath, the state government decided it had to step in and stop people from trading organs for money, by promoting deceased organ donation.

It conducted workshops to educate and sensitise medical professionals from across the state on deceased donation, declaring brain death, and the transplant formalities involved among other things. The participants also recommended ideas that were considered by the government to streamline the procedure of fair allocation of organs.

It was around this time, that a 15-year-old boy Hithendran from Kanchi, approximately 70kms from Chennai, met with a fatal motorbike accident and was declared brain dead. His parents, who were doctors, took the brave and unprecedented step of donating his organs. His heart saved a nine-year-old girl who was in dire need of a new heart. Additionally, his bone marrow, kidneys, liver, and corneas were donated too. Their decision to donate made a case for organ donation and spread a lot of awareness about the cause. Hithendran and his family were lauded as heroes and the case galvanized the state like never before.

Compared to other states in India, “Tamil Nadu had a big start. It was the first to start various initiatives and awareness activities to promote organ donation”, says Sunayana Arora Singh, Co-Founder of ORGAN India, an NGO that works to propagate the cause. The organ donation rate in Tamil Nadu in 2014 was an encouraging 1.9 per million population as opposed to 0.34 per million population across the country, according to MOHAN Foundation, another NGO that aims to raise awareness about the cause.

“Tamil Nadu has seen exponential growth over the last 8 years”, says Dr. J Amalorpavanathan, Former Convenor of TRANSTAN, adding that the success is “mainly due to several hospitals equipping themselves to maintain brain dead persons (ensuring that their organs remain oxygenated) and undertake transplants.”

According to Government Orders issued by the State, it is mandatory to declare brain death in Tamil Nadu. This enhances the chances of deceased organ donations. “There is a huge gap between the demand and supply of organs. The only way to meet the demand is to promote deceased organ donation. Living donations can only be made to a certain extent and not in the case of all organs”, says Dr. Sunil Shroff, the Founder of MOHAN Foundation.

Before the government intervention in 2008, the NGO used to work with 6-8 hospitals on organ transplants. Once the government stepped in, the number of hospitals involved went up to 30. “The aim was to ensure that no organs go to waste”, says Dr. Shroff.

The waiting lists in the state became centralised, digital, and transparent. The law was also strengthened to penalize those who messed up. “More teeth was given to the law after 2011”, adds Dr. Shroff.

There is also a set of guidelines for non-transplant centres in Tamil Nadu to ensure that all organs get used, says Bhavna Chabbaria, CEO of Shatayu, another NGO that works to inform people about organ donation. “Their centralised waiting lists, streamlined procedures to declare brain death and allocate organs inculcate faith and credibility in the cause. Hospitals work in sync with the government which is not the case in other states”, she adds. A lack of coordination usually leads to dire consequences, like this instance of a wasted liver in a hospital in Gujarat. “There were no takers for a brain dead patient’s liver at the hospital he was admitted in. The hospital didn’t reach out to other hospitals to check for potential recipients.”

In other states, unlike Tamil Nadu, there is no government or central body to monitor or hold responsible or question the proceedings in an organ transplant case. “This is imperative to successfully increase the rate of organ donation. Tamil Nadu can be looked at as an example and lessons can be learnt from its success “, says Bhavna. Additionally, the laws and guidelines laid down need to be implemented thoroughly.

“Another major hurdle that India needs to overcome is that of declaring brain-death. This is a major challenge, and often not on doctors’ priorities”, adds Dr. Shroff.

Tamil Nadu’s lead in deceased organ donation did not happen overnight. But it has gone to prove that with the right policies and public support, the culture of organ donation in a state can be completely overhauled.

Hithendran was 15-years-old when he met with a fatal accident. His parents donated his organs and helped raise awareness on organ donation.