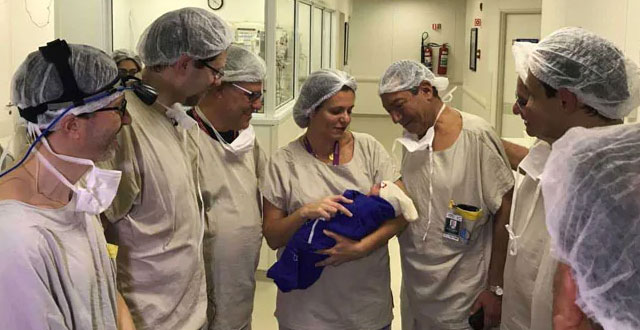 New Delhi: A 32-year-old woman, who underwent uterine transplantation from a deceased donor in São Paulo, Brazil in September, 2016, gave birth to a healthy baby girl in December 2017, after a gestation period of almost 36 weeks, according to a paper published in The Lancet journal. The baby girl delivered through caesarean procedure and will be celebrating her first birthday this week on December 15. The Lancet had described this live birth as a medical milestone which has given hope to all women with uterine infertility. The live birth established the proof-of-concept for treating uterine infertility without the need of living donor surgery.

The paper titled ‘Livebirth after uterus transplantation from a deceased donor in a recipient with uterine infertility’ said that the donor, a 45-year-old woman, had died of subarachnoid haemorrhage which is a type of stroke involving bleeding on the surface of the brain. The recipient, the mother, was suffering from Mayer-Rokitansky-Küster-Hauser (MRKH) syndrome which is a disorder that causes the uterus to be underdeveloped or absent, although the external genitalia are normal.

The operation involved connecting veins from the donor uterus with the recipient’s veins, as well as linking arteries, ligaments and vaginal canals. The paper said that the recipient showed satisfactory recovery post operation and was discharged after only eight days. The first menstruation occurred 37 days post-transplant and regularly, every 26-32 days, thereafter. The pregnancy occurred seven months post-transplant after the first single embryo was transferred.

The paper reported that no rejection occurred after the transplantation and during gestations as the patient was on immunosuppression/ anti-rejection medication along with other medicines. No blood flow abnormalities were detected in the uterine arteries and fetal umbilical nor were there any fetal growth impairments during the pregnancy. The uterus was removed in the same surgical procedure as the livebirth and immunosuppressive therapy was suspended. The baby girl and mother were healthy post-partum.

The paper said that no case of livebirth via deceased donor uterus was successful before this case which raised doubts about its feasibility and viability, including whether the womb remains viable after death due to an inadequate blood supply to the organ. While uterus transplantation from living donors had already became a successful treatment for infertility. This case proves that infertility can be treated without putting a living donor through the process of surgery and recovery.

Also Read: Life After Organ Transplant: The Precautions, Restrictions And The Challenges