Sanjay Kandasamy from Kancheepuram, India’s first case of living donor liver transplant who received a part of his father's liver back in 1998, is healthy and is a third-year medical student training to become a transplant surgeon himself 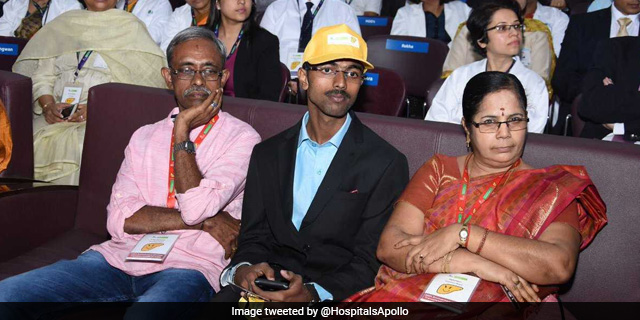 New Delhi: Sanjay Kandasamy from Kancheepuram, Tamil Nadu, now 21 years old, did not have an ordinary childhood. When he was just 20 months old, he needed a liver transplant to survive. Back then in 1998, a part of his father’s liver was used for his transplant. Liver has a unique property of regenerating itself, making it possible for a living person to donate a part of their liver. This is considered to be India’s first case of successful living donor liver transplant. No mean task, the feat was achieved by a private hospital in Delhi and was commemorated by the government of India on the 15th anniversary of the transplant by releasing a postage stamp in 2014. Now, after 20 years of the transplant, Sanjay is doing well and is a third-year medical student training to become a transplant surgeon himself.

Also Read: Re-Born At The Age Of 45, Thanks To An Organ Donor, Naresh Vaidya Feels Super Happy To Be Alive

Sanjay was born with Biliary Atresia, a rare condition that affects one in 12,000 babies with the only lasting remedy being a liver transplant surgery. The disease results in one or more bile ducts to get abnormally narrow, blocked or absent because of which the bile juice is unable to leave the liver and builds up inside it producing bilirubin, informs Dr. Anupam Sibal, Senior Pediatric Gastroenterologist, Indraprastha Apollo Hospital. Bilirubin poses a hindrance in the natural pathway of clearance of body’s wastes and causes jaundice like symptoms that include yellowing of skin and eyes, poor absorption of nutrients, and a swollen abdomen.

When Sanjay’s parents learnt about the disease and the fact that their baby had slim chances of survival, barely a few months, their life came to a standstill. They looked at every possible opportunity to save him. Eventually, they came to Delhi where they found that liver transplant can be a possible solution. Sanjay’s father decided to donate 30 per cent of his liver to his son.
Sanjay’s doctors said that Mr. A Kandasamy, Sanjay’s father did not receive the support of his relatives but he was determined to save his child. He moved to Delhi for few months with his wife and son.

Liver is divided into eight parts, the left lobe is cut to be transplanted to babies. Liver has a unique property to regenerate the part that is cut for transplantation, up to 90 per cent within 12 weeks.

Despite several concessions offered by the hospital to Mr. Kandasamy, he ended up spending about Rs. 5 lakh on Sanjay’s treatment and their stay in Delhi.

Also Read: A Brother Turned Saviour For His Sister And Gave Her A Second Lease Of Life 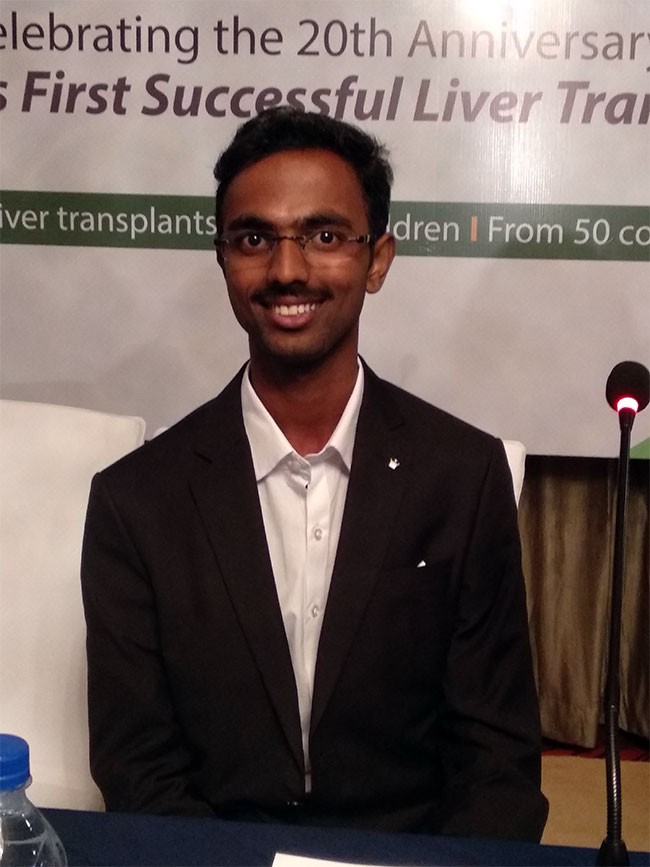 “I was given two lives – one by my birth, second by the transplant and by the care the doctors gave for 20 years”, says Sanjay Kandasamy

Post-operation, Sanjay was given immunosuppressant medicines to weaken his immune system so that his body does not reject someone else’s liver inside it. However, because of the immunity system getting weak, there was always an imminent threat of infections. So it was important to take certain precautions like he was not allowed to eat raw vegetables, not play in the dust, and always wear a mask when outside, among others. Now he takes only one tablet each day which he needs to continue every day.

Another challenge was to protect the tiny blood vessels of Sanjay’s liver from getting blocked. To ensure everything is on track, Sanjay was given a Liver Function Test (LFT) every three months till the age of five. After that LFT was given twice a year and now Sanjay needs just an annual check-up.

The experts say that if a child has survived the first month after the transplant operation then the chances of survival increase. Their growth and development is like any other child. Barring a few restrictions like taking medicines on time, regular blood tests, restricted eating out, and being extra cautious about hygiene, life is completely normal. Dr. Goel said,

Once a patient crosses five years of transplant, we consider them like a normal person as the symptoms and conditions they have are similar to those found in a normal person. Sanjay is one such case. He had a bad time initially but his liver is functioning very well now.

Sanjay, who intends to specialise in liver transplant surgery, said,

I was given two lives – one by my birth, second by the transplant and by the care the doctors gave for 20years. I would not have made it this far without their help. My parents and family have always encouraged me to make the most of this second chance in life. Seeing the work that doctors do from such close quarters made me determined to become a doctor myself. I want to contribute to saving lives of our countrymen and also set an example that any challenge in life can be overcome.

As per World Health Organisation (WHO), in India, around ten lakh people are diagnosed with liver disease every year making it the 10th most-common cause of deaths in India.

Dr. Anupam Sibal asserts that liver disease is a major cause of concern in the country. He clarified that it is not only alcohol that damages the liver, but Hepatitis B and C are also major causes of liver damage. He added,

More than two lakh people die every year due to liver damage. While around 1,800 liver transplants are done annually, as many as 20,000 people need a liver transplant at any given point.

Dr. Sibal said, “While there are transplant programmes that are accessible to Indians without having to travel abroad. The cost has come down considerably as now all the equipment and medicines we use are being made in India and we don’t have to import everything. There is still a lack of infrastructure for life-saving organ donations and transplant. Out of 301 hospitals in India equipped to handle the process, 250 have registered with National Organ and Tissue Transplant Organisation (NOTTO), showing that in order to conduct an organ transplant, there exists one fully equipped hospital for around 43 lakh people.”

While India has come a long way Since the first liver transplant operation, there is still a huge gap to be filled. Why should a living human go through the process of surgery to donate a part/ whole of their organ to someone when we can have cadaver donations? People have to open up to organ donation and donate the organs of their deceased loved one to those who may get another chance to live after transplant.

The key is to educate the public about organ donation and introduce them to the idea in every way and through various mediums and platforms, experts said. With just 1 person donating per 2 million people, India’s donations rates are abysmally low, and there is huge room for improvement; in contrast lakhs of people die every year just waiting for an organ, inform experts. If more people were to pledge their organs after death, it would clear a huge deficit and give a new lease of life to thousands. Sanjay’s experience is a testament to the difference organ transplant is making in people’s lives. So this Indian Organ Donation Day, take the pledge to donate your organs.

“I was given two lives - one by my birth, second by the transplant and by the care the doctors gave for 20 years”, says Sanjay Kandasamy

“I was given two lives - one by my birth, second by the transplant and by the care the doctors gave for 20 years”, says Sanjay Kandasamy