After a 14-year-old girl from Indore was declared brain dead, her parents agreed to donate her organs that saved lives of three patients in the city 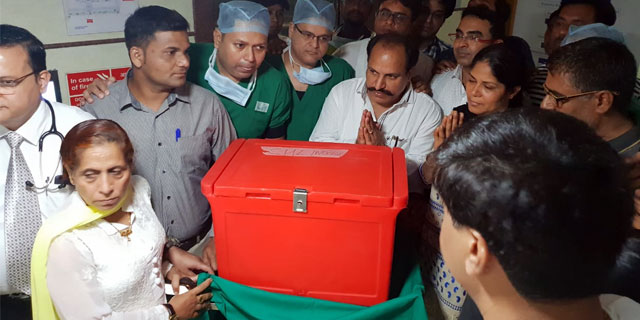 Mumbai: On August 12, an ambulance made its way from Shalby hospital in Indore through peak traffic, reaching its destination, Choithram Hospital and Research Centre, 7.5 kilometres away in a record eleven minutes. On a normal day this same route and distance, passing through Indore’s busiest areas would have taken at least 45 minutes. But that day was different as 14-year-old’s kidneys were eagerly awaited for a 30-year-old female patient and a 35-year-old male patient, for life-saving transplants. The Indore Traffic Police had swung into full action as it was the second Green Corridor created on the same day that allowed the ambulance, carrying the organ, a free passage.

The first Green Corridor, a route that is demarcated and cleared out for an ambulance carrying harvested organs, was made for transporting the liver for a patient suffering from liver cirrhosis.

Three lives were saved on one day, thanks to the family of the 14-year-old girl who died in a road accident. On August 9, A teenager was admitted to Shalby hospital after suffering serious head injury. She battled for three day before succumbing to the injuries. After the doctors suspected a brain death, two appnea tests were conducted to assess the situation. As soon as the result came out, Dr Sharad Thora of Indore Organ Donation Society contacted Muskaan foundation, a local NGO to convince the parents to donate their daughter’s organs.

In normal situations, it is very difficult to convince the family members to donate their loved ones’ organs in an emotional turmoil. But here, since it was a police case, the procedure of postmortem was mandatory. In a postmortem, the body anyway goes through dissection, so convincing them became comparatively easier, Jeetu Bagani of Muskaan foundation, who played an active role in persuading the parents, tells NDTV.

It took almost 2-3 counselling sessions and hours of convincing before the deceased patient’s parents, agreed to donate the organs. “Towards the end, they agreed to donate and said that at least by donating the organs, their daughter will remain alive,” adds Mr Bagani.

Once the doctors tested her organs, they concluded that liver, kidney and eyes are perfectly healthy and are in a condition to donate. The decision of donating the heart was reversed as only 30 per cent of the heart was functioning. The eyes were donated to M K International Eye bank.

Muskaan foundation volunteers coordinated with the Regional Organ and Tissue Transplant Organisation (ROTTO) to identify potential recipients. The ROTTO, which is the regional centre for coordination and networking for procurement and distribution of organs and tissues and registry of Organs and Tissues Donation and Transplantation, identified the matching recipients and contacted the Choithram hospital and CHL hospital.

The time and route were planned in collaboration with the Indore Police and it was the police officials who suggested the Green Corridor. Till now Madhya Pradesh’s largest city Indore has witnessed 34 Green Corridors in last 34 months beating major cities like Delhi and Mumbai.

Meanwhile, team of doctors at Choithram and CHL had prepped their respective patients and as soon as the organs were delivered, the operation was initiated. Within 5-6 hours, liver and kidneys were successfully implanted, said Mr Bagani.