Organ Donation: A Heart Covers 282 Kilometre In 1 Hour 47 Minutes To Save A 27-Year-Old’s Life

The heart, that saved the life of a young man suffering from Dilated Cardiomyopathy for a year, was donated by the family of a brain-dead patient in Surat which was transported to Mumbai with the help of green corridor 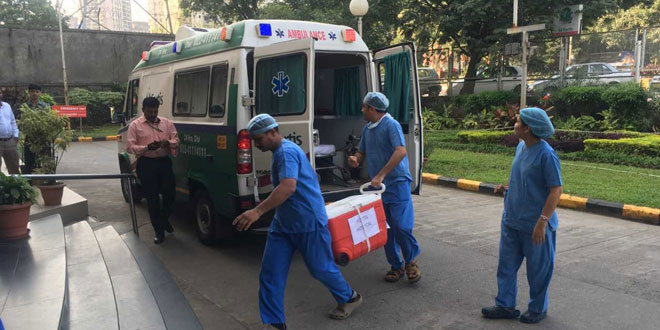 New Delhi: “My brother is everything to me, and I have no words to express my happiness. We had almost lost all hopes. It is a miracle that my brother is able to talk to us now”, says Manisha, sister of the heart recipient. A 27-year-old man from Surat is a daily wage earner who a year ago was diagnosed with Dilated Cardiomyopathy, a condition where the heart becomes enlarged and cannot pump blood effectively. He was waitlisted in September 2018 for a heart transplant. On November 20, he received the heart at Fortis Hospital Mulund marking Mumbai’s 20th heart transplant of 2018.

The donor, a 21-year-old Surat woman, met with a road traffic accident and was rushed to a local hospital in Surat for treatment. However, she was subsequently pronounced brain dead. Medical Social Workers and representatives of NGO Donate Life counselled the grieving family about organ donation and managed to convince them to donate their beloved daughter’s Heart, Liver, Corneas and Kidneys. While the heart was transported to Mumbai, her kidney and liver were given to recipients in Ahmedabad.

The young man was surviving with the help of a Left Ventricular Assist Device (LVAD) implanted in his chest for 35 days till he received a heart, after a drastic fall in his heart’s pumping capacity. The donor’s heart was swiftly transported from a Surat medical facility to Mulund’s Fortis Hospital, a distance of 282 kilometres, in JUST 1 hour and 47 minutes.

A green corridor was created from the hospital to Surat airport at 7.47am from where a commercial flight ferried the organ to Mumbai. The Fortis doctors, who flew to Surat to retrieve the heart, reached Mumbai at 8.43am. A green corridor from Mumbai airport to Mulund ensured the organ entered the operation theatre by 9.14am. The team of cardiac specialists at Fortis Hospital, Mulund led by Dr Anvay Mulay, Head-Cardiac Transplant Team performed the heart transplant.

The family of the recipient was informed one year ago about ‘heart transplant’ being the only lasting solution for him. However, due to lack of adequate funds for the operation and the treatment, the family could not register him for transplant sooner. “I am thankful to the hospital for concessions we have been offered by it and also to the members of various trusts who have made generous donations for helping my brother get another chance to live. I am also thankful for the good-hearted people who agreed to help my brother even in their time of grief”, says the sister.