‘India will not belie your hope,’ Says Sushma Swaraj To Pakistani National For An Organ Transplant In India 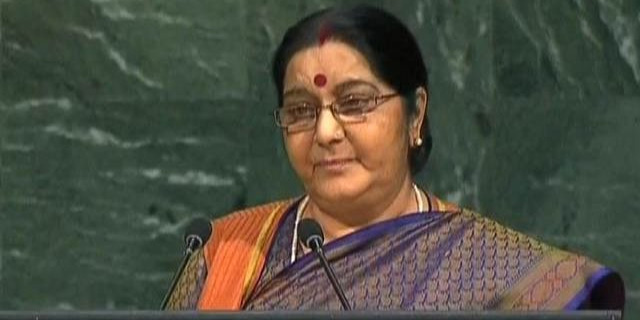 New Delhi: Ahead of the organ donation day which is celebrated on November 27 in India, External Affairs Minister Sushma Swaraj in a humane gesture granted visas to four Pakistani nationals wanting to undergo organ transplants in India. A few days back Shahzaib Iqbal had requested for a medical visa for his cousin’s liver transplant on twitter, “After ALLAH you are our last hope.. kindly allow Islamabad embassy (meaning Indian High Commission) to issue us medical visa.”

To which the Minister replied, “India will not belie your hope. We will issue the visa immediately,” Sushma Swaraj tweeted in response to a request from Mr Iqbal.

India will not belie your hope. We will issue the visa immediately. @IndiainPakistan https://t.co/XMGaNrA5i6

On November 21, another Pakistani national Saad Waqas‏ had put forward a similar request for his mother’s liver transplant in Noida, “@SushmaSwaraj ma’am plz allow me the visa of my mother liver transplant in noida she is playing now with life and death,”

Giving a go ahead, the Minister issued visa for his mother, “We are giving visa for the liver transplant of your mother. @IndiainPakistan,” she tweeted.

“This is urgent. Indian High Commission – pls issue the visa (sic),” she said in another tweet, replying to a request from Ghazanfar Ali for his mother’s liver transplant in India.

To another request for a visa by Pakistani woman – Sajida Bakhsh, Ms Swaraj said a visa will be issued to her. Ms Bakhsh had tweeted that she had undergone a liver transplant in Haryana last year and wanted to visit India for a follow-up treatment. The Minister also assured another Pakistani woman of granting visa on medical grounds.

These recent approvals for visa requests for organ transplant, comes just before the Organ Donation week. Each year the last week of November is celebrated as the organ donation week in India to raise awareness about the need to donate organs. India has one of the lowest organ donation rates in the world and is working towards raising awareness levels and improving its infrastructure for organ retrieval and transplant. Last year in December, Ms Swaraj herself underwent a kidney transplant at the All India Institute of Medical Sciences (AIIMS). Ms Swaraj received kidney from an unrelated donor after her daughter was turned down as a potential donor by the doctors for being diabetic.