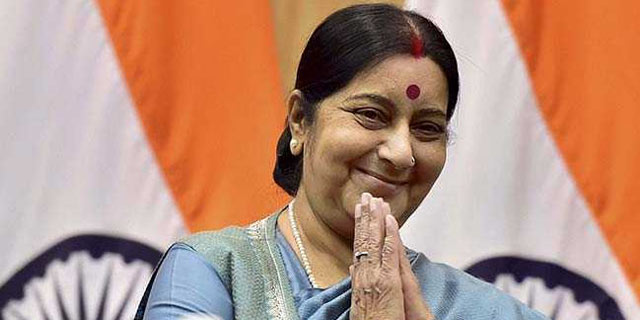 Minister of External Affairs Sushma Swaraj continued to give priority to medical emergencies as she assured to give visa to four Pakistani nationals on November 29, 2017. Mrs Swaraj’s gesture comes merely two days after the National Organ Donation day, during which in a similar display of humanity, she had granted visas to four Pakistani nationals wanting to undergo organ transplants in India. Mrs Swaraj repeated her gesture on November 29 and assured the patients’ family members of visas, after they had requested her assistance, via Twitter.

14-year old Hadia Aarbi’s father Sohail Aarbi had applied for a visa on October 24. His daughter would undergo a liver transplant at private hospital in Delhi. Along with Mr Aarbi and his daughter, a live donor and another attendant would also accompany the Aarbi family during their stay in Delhi. Responding to Mr Aarbi’s request, Mrs Swaraj assured him that the Indian High Commission in Pakistan will issue visa for Hadia Aarbi’s liver transplant surgery.

A similar request was put in place by Muhammad Sajid, on behalf of Muhammad Tyab. Mr Tyab would undergo treatment for liver transplant in a private hospital in Gurugram and was supposed to meet with a doctor on November 20, 2017. Similar to Hadia Aarbi, Muhammad Tyab would be accompanied by a live donor and two other attendants. Given the urgent nature of the request, Mrs Swaraj requested Mr Tyab to submit his visa request to the Indian High Commission in Pakistan.

Mrs Swaraj also assured that visa will be given to 9-year-old Abdur Rehman, who will undergo a bone marrow transplant in India. For Mubarak Ali, who had applied for a visa on October 31 to undergo a liver transplant, did not hear back from the Indian Commission. His plea on Twitter was responded to by Mrs Swaraj, who said that his visa request was approved.

There is a request for Bone marrow transplant of Master Abdur Rehman who is only 9 years old. We will issue visa for his treatment in India. @IndiainPakistan

Further, the nation’s organ donation sector is has been rocked by kidney transplant rackets, as well as foreigners visiting the country for organ transplants. The country still does not have a law allowing transplantation of organs from the deceased. Notwithstanding diplomatic relations between the two countries, issuing visa for a medically serious surgery like organ transplant shows the transcendence of humanity across borders.