Union Minister of External Affairs Sushma Swaraj tweeted on Wednesday that she is undergoing tests for a kidney transplant, and is currently on dialysis. Here’s a look at some well-known cases of organ transplants that involved prominent people. 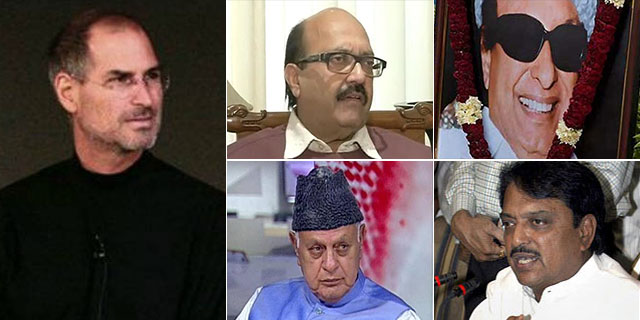 New Delhi: On Wednesday morning, Union Minister of External Affairs Sushma Swaraj tweeted that due to kidney failure, she was undergoing dialysis and was also undergoing tests for a kidney transplant.

As soon as the news broke, responses started coming in from all over. Politicians from every party as well as common citizens wrote to her to wish her a quick recovery. Some went as far as to offer their own kidney to her.

Here’s a look at some other well-known cases of organ transplants.

In 2014, former Union Minister Farooq Abdullah got a reprieve from his chronic kidney disease when he received a kidney from his wife. The couple underwent the surgery in London where Abdullah had been undergoing dialysis for more than a year.

Two times Maharashtra Chief Minister and Union Minister Vilasrao Deshmukh died of multiple organ failure in a hospital in Chennai in 2012. It was a tragic case where a delay in harvesting and transplanting an organ led to his death.

The 67-year-old was flown from Mumbai to Chennai’s Global Hospital for an liver transplant, but he failed to get the transplant on time. While his sons had offered to donate part of their liver to him, doctors had felt a whole liver from a deceased donor was a more viable option.

“Had we got a liver he would have had a chance. Last night, a brain-dead donor died before we could transplant. Three donors were available today, but it was too late,” said Dr K Ravindranath, Chairman of the Global Hospital Group.

Samajwadi Party leader Amar Singh was admitted to Singapore’s Mount Elizabeth Hospital and Medical Centre in 2009 for a kidney transplant. Both his kidneys had failed, and he had been undergoing dialysis at Delhi’s Batra hospital before the transplant. An unidentified party worker close to him was believed to be the donor.

In 1984, Tamil Nadu’s Chief Minister and AIADMK founder M.G. Ramachandran was hospitalized for breathlessness. He was expected to be discharged the next day but his health deteriorated. He suffered a stroke, kidney failure and went into a coma, leading to chaos in the state. He was immediately flown to the US for a kidney transplant. His 31-year-old niece Leelavathy donated her kidney to him, giving him a new lease of life. Post his surgery, MGR returned to politics and took oath as Chief Minister of Tamil Nadu for the third time.

Five heart attacks, an open heart surgery and a battery-operated heart pump – all these led to Former Vice President of the United States of America Dick Cheney’s heart transplant. He received the heart at the age of 71 after waiting for 20 months.

At one point in time he believed he wouldn’t live through the night and had made funeral plans with his family. He had also written a resignation letter that was to be made public if he were to find himself incapacitated.