Amitabh Bachchan Launches ‘Breast Health’ App, First Of Its Kind In The World

Amitabh Bachchan launched the 'ABC of Breast Health' app and said timely detection, treatment and awareness can help a person survive any disease 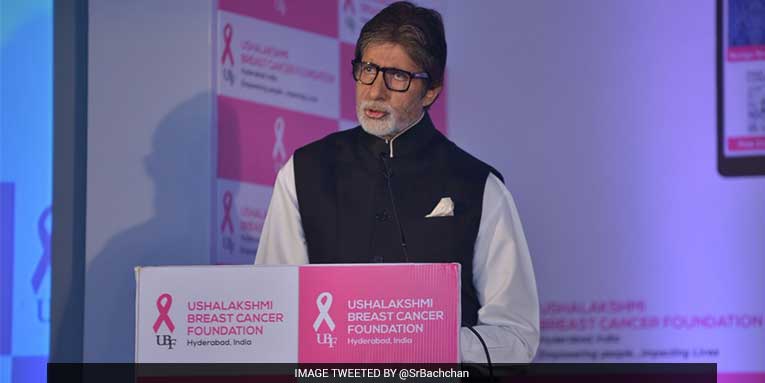 Mumbai: Megastar Amitabh Bachchan, who is a tuberculosis and Hepatitis B conqueror, on Wednesday launched a mobile application named ‘ABC of Breast Health’ here and said timely detection, treatment and awareness can help a person survive any disease. The actor, who has been associated with various health campaigns like Polio, Hepatitis B, Tuberculosis and diabetes, shared his own story as an example to drive his point home.

“In 2005 when I was diagnosed with Hepatitis B, my 75 per cent liver was already damaged. I have been surviving with my 25 per cent liver since then. Because the disease was detected at a time and proper care was taken, today I am standing in front of you people.”

In 2007, I was diagnosed with tuberculosis at an early stage, so I was able to take a treatment and come out of it. In short, I am saying from my life experiences, timely detection of any diseases is always beneficial, said Mr Bachchan.

This is the first-ever mobile app in the world dedicated to breast health and is launched in 12 most popular languages in the country. It’s conceived, created and designed by Ushalaskhmi Breast Cancer Foundation.

Since I have been associated with various health campaigns, I have realised that people have very less knowledge about such diseases and are living with many misconceptions. This app will help commoners to gain a general awareness about breast cancer, Mr Bachchan added.

The evening was graced by Pamela Yash Chopra, Patron of Ushalaskhmi Breast Cancer Foundaion, along with Dr P.Raghu Ram, CEO and Director of the foundation, K. Padmanabhaiah who is the former Union Home Secretary, Jayesh Ranjan, Principal Secretary, IT, Government of Telengana and two breast cancer survivors Dharini and Mukta Chindalia.

The app is available on Google Play and Apple for free downloading.

A proposal has also been submitted to the Health Ministry to consider incorporating the application in the official health portal of the Union Government.