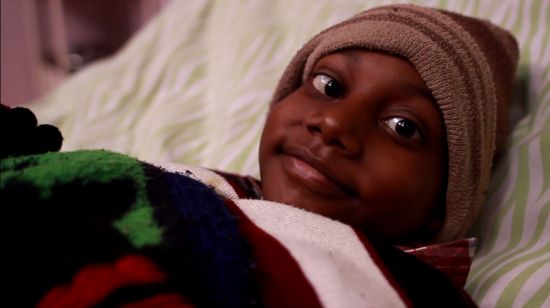 Drawings on the walls along the staircase, tiny tables and chairs, toys and books stacked in different corners – everything that would have you believe that you were at a playschool or a children’s daycare center. Except that the walls of this building hide a stark reality. It is home for children fighting a battle of a lifetime, with cancer.

These rooms belongs to Pediatric Day Care and Transition Home of a NGO called Cankids Kidscan, New Delhi India, have many heart-wrenching stories of parents and their little bravehearts, whose smiling hopeful faces hide the pain of this dreaded disease.

Resting in one of the rooms is 10-year-old Shivdeep, battling Metastatic Neuroblastoma, a form of cancer found in children.

Shivdeep’s nightmare came to light six months ago. His parents took him to various hospitals in and around where they lived. They finally decided to come to Delhi, few days before Diwali with the hope that the young boy would recover soon. The trauma of their son’s illness was made worse by the more mundane but critical issues of where to put up in Delhi, given that the treatment was going to be a long haul, coupled with how to make ends meet, given the cost of treatment.

The solution found its way to the hospital. Cankids, discovered Shivdeep in All India Institute of Medical Sciences (AIIMS) where he was being treated. They not only provided him and his family with a shelter to live in, but also took on financing his radiation and chemotherapy sessions. Not only that, Cankids also took care of some of the other important needs like providing him with an air mattress so that his bed sores don’t trouble him and counselling his family to help them get through these hard times.​

But the family is now very worried about his recovery. They don’t feel that Shivdeep’s body is able to cope with the treatment.

“Earlier even though it would hurt for him to walk, but he could walk nevertheless. But ever since the fluid from his spine has been removed, he has lost all sensation in his legs,” says Bijender Pal, Shivdeep’s father.

There are many stories of children like Shivdeep and their families languishing outside hospitals, battling not just the deadly disease but also the lack of any support system. The thin silver lining is that there are now these organisations that make an effort to not just find these families, but also take on the responsibility to support them and keep their hopes alive, in these trying times.

A Heart-wrenching Story of Kushmeet