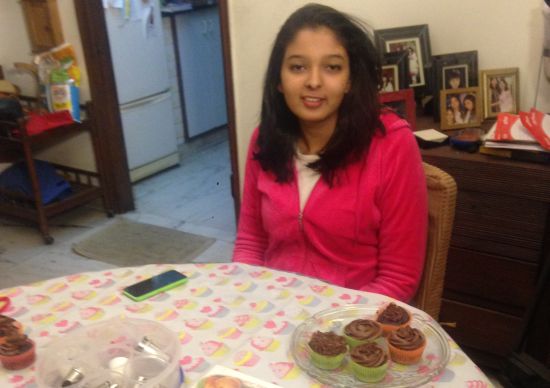 At the age of 13 you are either coping with peer pressure, study woes, or fighting pimples. To be detected with Osteo Sarcoma, a cancerous tumor in the bones, could mean the end of the world for a teenager.

Not for Oraya. Initially her parents decided not to tell their teenage daughter that she had cancer. Instead they told her that she had a tumor which needed treatment. But even after she got to know, she decided to fight cancer.

Says Oraya’s mother Priti Sayeed, “We didn’t want to tell her in order to protect her, but she was so good through the illness. When her hair began falling off, she just woke up one day and told me – Mom please just shave my head’’

It was this acceptance of her condition and a great sense of humor that helped Oraya through the hard times.

She says laughing, “When I initially complained to mom about the pain in my leg, she thought I was being fat and lazy, and even enrolled me at the gym.’’

Oraya had to drop out of school for a year during her treatment and took to baking to keep herself occupied. She says icing cupcakes gave her immense peace and happiness.

It soon turned into a successful venture with bake sales and orders. Her sister created a Facebook page called Oraya’s Oven and the phone hasn’t stopped ringing since.

“I started with the premixes that you find in the market, and then an aunt of mine showed me how to bake from scratch and I learnt to do icing. I had a stall at the Jor Bagh Diwali mela where we let kids decorate their own cupcakes and it was a real hit. We completely sold out,’’ she says with a smile.

Today Oraya is 17 and back in school. She now sports a titanium prosthesis in her upper right thigh. What stands out about Oraya’s struggle with cancer is the positivity and humor with which she fought her battle and got her life back on track.