“Life hasn’t been easy on me. My father was an alcoholic, and extremely abusive. I’ve seen him split my mother’s head open by hitting her with a plass. He died after he was beaten up by some goons.” 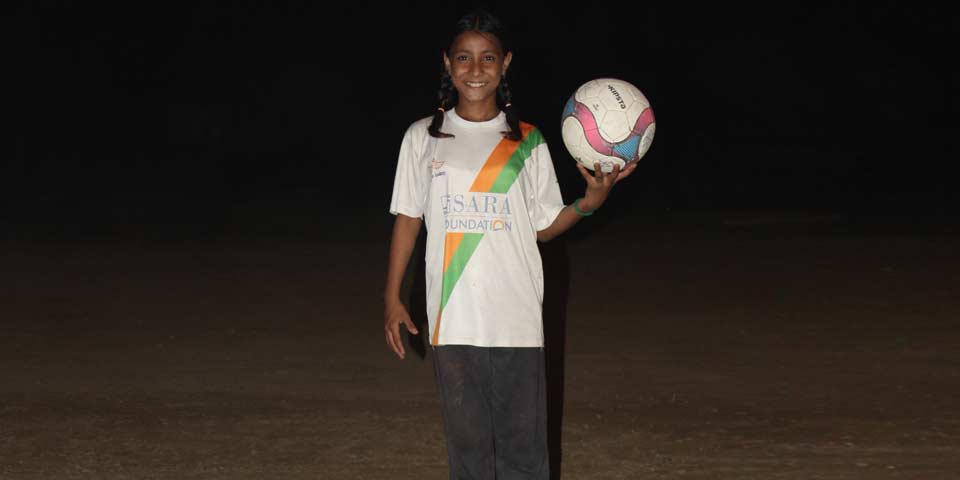 “As a child, I never went to school. My parents were never particularly concerned about me. Once in a blue moon, they would suddenly nudge me to go to school. But they would never follow up, and I didn’t care too much about school. I used to beg at a temple nearby. That continued until I joined My Angels Academy. I was about 8-years-old then.

“I would never bathe as a child. I was always dirty. So much so that nobody would want to talk to me and come anywhere near me. When one of my older cousin brothers got me enrolled at the academy, Sylvester bhaiya, founder of My Angels Academy, shook hands with me and sat down next to me to chit-chat a bit. I felt good, and ashamed of myself. I decided to clean up my act and at least try to put my best foot forward.

“I decided to focus on football – shoot for the goal, make a difference. I want to become a football player. Given that I never attended school when I was young, and that the teachers in government schools don’t teach as well, I never really developed an inclination towards academics. I never liked going to school, I’d rather roam around and while away my time. But then Sylvester bhaiya explained to me that it’s in my best interest that I study. I started learning the alphabets when I was in Class 5.

“Even though both my parents did push me to go to school every now and then, they would burden me with a lot of household chores. They would never assign so much work to my older brother though. This would make me very angry. My mother still piles on work on me, but I ask my brother to do it all. I’m willing to take a beating from my mother, but I refuse to do the work. It hasn’t been easy, accepting and accommodating my family as is. My father was an alcoholic, and would often beat up my mother. This one time he split open her head with a plass. I could see my mother’s nerves; there was blood all over the place. I was swelling up with tears, and rage – a helpless rage. I couldn’t figure out what to do. I had tried coming in between them, but he pushed me away and I banged my head into a wall. My head started spinning from the impact.

“He died, my father. We used to buy fish on credit from this couple in the village. This one time they came home and started demanding Rs. 10,000. We didn’t have any money; and we were heavily in debt because my father would keep borrowing money to spend on alcohol. They both climbed on top of my mother and beat her black and blue. My father wasn’t home then. They were hurling abuses that I couldn’t bear to hear. Later, one day, they sent goons to beat up my father. He was a rickshaw puller; the goons caught hold of him late at night and bashed him up. He only lay around in bed after that. He didn’t go to work, he didn’t eat anything. Soon after, he fell from a flight of stairs after his head started spinning due to weakness. My mother and Sylvester bhaiya put in a lot of money hoping that he’ll recover. But he didn’t.

“None of the other family members help, even from my father’s side. They didn’t come forward even when he was in the hospital. My paternal grandmother only contacts us when she needs some assistance from my mother.

“Things are fine now. My elder brother recently got a job, and my mother earns a monthly wage by working as a domestic help. Sylvester bhaiya helps out with a little money and ration. He’s also taking care of my younger sister’s treatment who burnt herself while playing with match sticks. Bhaiya has provided a lot for me and my family. There used to be a time when I used to hide from him like I was a thief because I was ashamed of myself. I’ve come a long way since then.”

– As told to Tania Goklany. She met Khushi at My Angels Academy in Delhi’s Vikaspuri colony.