“Each time my mother tried to procure money from my father for household expenses, he’d beat her up. This one time, he pounded her so badly that he broke her right arm. Seeing how much she had to suffer to arrange money, my siblings and I decided to quit school. It seemed like we were receiving our education at the cost of her agony.” 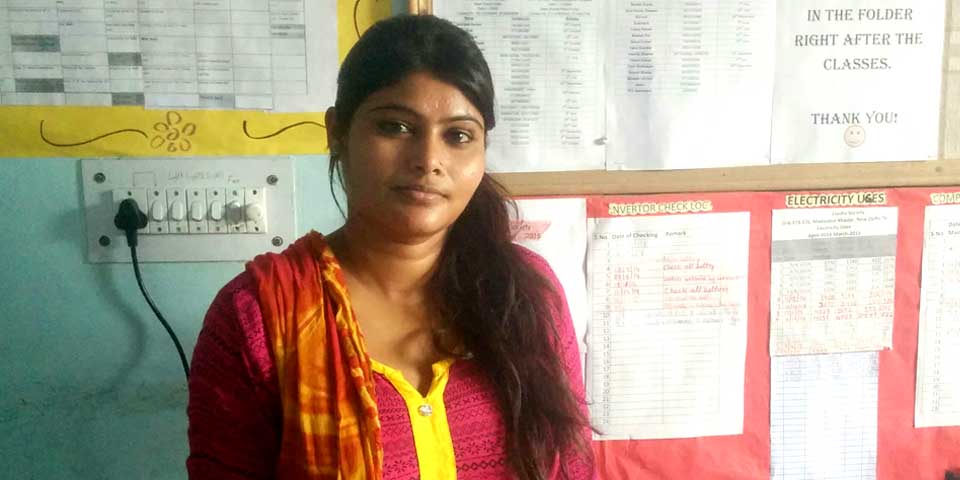 “I dropped out from school in Class 7. My family could barely manage two meals in a day, education seemed like an added expense. My younger siblings – two brothers and two sisters – quit studying too around the same time. My oldest brother, who stays on the floor above us in the same building, is married and is working a job someplace. My father doesn’t live with us; he stays by himself in Ali Gaon, some 8kms from our home here in JJ Colony. He’s an abusive alcoholic, and swings by our place some times to pick fights and beat up my mother. This one time, he beat up my mother so bad that he broke her right arm. She has a rod inserted in the arm now, but it’s not the same. She can’t work as much anymore, or lift too much weight; there are a lot of restrictions with the rod. Additionally, her health is giving away. She recently recovered from Tuberculosis, and is anguished because of joint-aches.

“She used to walk to his place on foot every single day with the hope of procuring money from him to feed everyone in the house. But nothing good ever came of these visits – not only would he refuse to give her money, he’d also beat her up. She often returned home with injuries. Seeing how much she had to suffer to arrange money, my siblings and I decided to quit school. It seemed like we were receiving our education at the cost of her agony. Moreover, we were forever struggling to afford our books, uniforms, etc.

“I continued to read, I didn’t give up on books altogether. I’d borrow books from a friend who used to get them issued for herself from an NGO called Jagori. She told me I could get them issued too in my name, so I decided to visit the NGO’s library. As chance would have it, I was asked to wait because there was a workshop being conducted on domestic violence. I didn’t know that Jagori was an NGO that fought for women’s rights. I sat there waiting, listening to what was being discussed during the workshop. Following what they said, I realised that domestic violence was a legal offence; that my father could be taken to task for it.

“All my life I’d thought that domestic violence was fine, that my father beating up my mother was normal. I had made peace with it and had accepted this brutality at home as a way of life. I had assumed that it was something that went down at every home and was the fate of every woman. Sitting there, waiting to be let into the library, a door to a different life opened up, a door I didn’t even know existed. I had made up my mind to make my mother attend one of these workshops even before I’d left the premises of the NGO.

“I didn’t tell my mother what it was exactly that she was going for, just that womenfolk from the village collect and discuss various things. I got involved with the NGOs youth programme activities, and my mother started opening up about her sufferings in these workshops. On hearing about her misery, the NGO asked her to file an application against my father. She came to me for help since she can’t read or write. I filled out the application for her, but she decided not to pursue it legally because it would’ve meant shelling out money. We simply couldn’t afford it. However, we learnt that we could dial 100 and tell on my father to the police every time he showed up inebriated. The police has dragged him away from our house quite a number of times, but he just doesn’t get his act together. Although, I think that he’s a little scared of us now; he doesn’t get physical anymore.

“I landed a job at Jagori thanks to this application I was filling on behalf of my mother. Noticing my handwriting, and the pace at which I write, I was offered a job to mobilise and get the youth more involved with the NGO’s activities. I was more than happy to accept the job.

“The day I received my first salary of Rs. 1,200, I ran to the tutor who used to teach me in Class 7. I told him I wanted to continue with my education. A lot of fine people used to visit the NGO, they would share stories from around the world in impeccable English. I wanted to be able to talk like them, be as confident as them, to complete my education. My tutor said that I could jump Class 8, 9 and sit directly for my Class 10 exams. Elated with the idea of being able to complete my schooling, I told him I’d like to enroll for the same. But, of course, money was an issue. The closing date for applying for Class 10 exams was soon approaching and I had to cough up Rs. 3,000. He offered to help me out with the amount I was short of as long as I promised to repay him.

“I cleared the Class 10 exams and wanted to now sit for my Class 12 exams. My contract with Jagori had terminated and I was looking out for a job. I landed a job with a shady packaging company in Noida that would’ve fetched me Rs. 4,000. However, I didn’t take it up. Madhu didi, the lady who was in-charge of the youth programme at Jagori, discouraged me from accepting it and asked me to visit Azad Foundation, an NGO that empowers women to earn livelihoods. She paid for my Class 12 exams’ applications and helped me get enrolled in a six-month long driving course at the foundation by getting the fees amounting to Rs. 2,000 waived off. I was quicker than everybody else; I completed the course in five months. I took this course four years ago and have been driving for a living since then. I work with Sakhi, a cab company of women drivers that also caters to only women.

“Along with my job, I am also pursuing two Bachelors’ degrees – one in social work from IGNOU and the other one in BA Programming from Delhi University’s Open School of Learning. I am running the house and also supporting the education of all my younger siblings. The fact that my oldest brother stays just above us is no solace or help; he’s extremely weird. I think he doesn’t approve of us taking a stand against our father in support of our mother. He doesn’t talk to us, visit us or behave properly with us. We share the same electricity meter, he doesn’t pay a penny. I have to pay for his electricity usage as well – wastage more than usage, to be honest.

“My 16-year-old younger brother has started pitching in financially. He recently got a job at some organization where he sweeps the floors. The money coming from him is also of great help. My youngest brother, however, strayed a little. He started indulging in drugs. We wanted to put him in a drug de-addiction centre, but he threatened us that he would run away. He’s come a long way since then. He usually helps out at home during the day and goes for his tuitions at night. He has drastically cut-down on his drug abuse. I talk to them as much as I can to get an insight into what’s going on with them, how they think, what they think about, etc. I share my opinions with them as well hoping that they don’t turn out to be like our father and oldest brother. I want them to be better persons, to respect women.

“Also, you know, my full name is actually Geeta Chauhan. But I dropped Chauhan, it’s my father’s legacy. Geeta Kumari, make sure to use this as my full name.”

– As told to Tania Goklany. She met Geeta at Etasha Society’s center in Delhi’s JJ Colony. Geeta did a three-month long course in Customer Service and Work Culture from Etasha Society which provides employability skills and placements to the youth from underprivileged backgrounds.