"My biggest dream is to move out of GB Road (Delhi's biggest red light area) along with my mother. Although, this place will never stop being home to me despite it having led to a lot of conflict in my life." 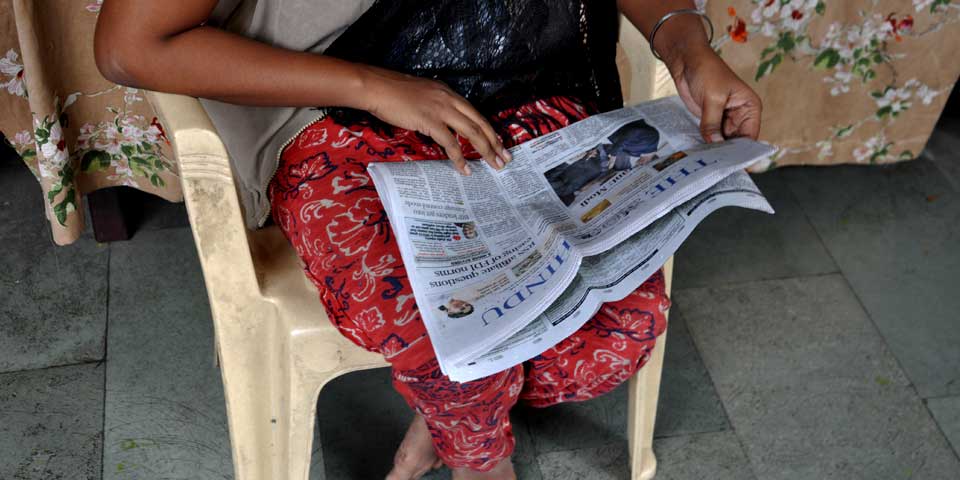 “I wanted to become a doctor till I was in Class 10. That’s when I visited the science laboratory in school, witnessed a few senior girls dissecting some animal and figured out that it’s not my cup of tea. The sight of blood freaked me out. I graduated in BA (Bachelor of Arts) and wanted to take up journalism after that. But a few personal issues cropped up because of which I couldn’t pursue journalism. I didn’t want to waste an entire year just because I couldn’t apply for journalism, so I took up B.Ed. (Bachelor of Education). Although, I still think I’d make a great reporter. I’ll go down that line later some time if fate allows me to.

“I hope to get a job soon. I’ve applied in several places for the position of an English teacher. Until I get one, I’m trying to use the time on my hands productively. I’m learning Bhratnatyam from Bhartiya Vidya Bhawan and western dance from Delhi Dance Academy on alternate days. I want to become a choreographer as well. The plan is to teach English in schools and choreograph routines simultaneously. I would’ve loved to be a full-time choreographer, but I won’t be able to support myself on that. Hence, teaching, not to mention that it’s a respectable profession.

“My biggest dream, however, is to move out of GB Road (Delhi’s red light area) along with my mother. This is what I’ve been working for all my life. But moving out doesn’t imply that my relationship with this place changes or gets crippled in any way. I was born here, I’ve spent all my vacations here – this place will always be home to me.

“Although, this place I belong to, has also led to a lot of conflict in my life. As a child, I was sent to Uttar Pradesh to study. I stayed there in a hostel and wasn’t aware of my own reality until I was in Class 11. When I learnt about my background and what my mother does for a living, I didn’t take to it positively, initially. It took a little time to sink in. When I’d accepted things and made peace with them, I decided to open up about it to my friends. I assumed that my friends won’t judge me based on my mother’s profession. But I was wrong. So much so that if I’d have an argument with any of them, I would get to hear ‘you’re just like your mother’. These words would pierce right through me. It’s not my mistake that I was born to someone who works at GB Road. Nor is it my mother’s mistake.

“Not only my friends, but even the office staff and a few teachers judged me. I could tell from the way they looked at me. Even an aunt, who practically raised me till I was about 12-years-old, passed a remark that I wasn’t to be blamed for. And I know that she meant it. My crime, as they would all often say was that I ‘belong to that place’. I want to show each one of them that my background doesn’t make me who I am, my potential does.

“I don’t want to hide anything from anyone. I am who I am, and I come from GB Road. This is my identity. But I do want to settle down in a job before I disclose my entire truth. It is, after all, my future that’s at stake. In one of the job application forms I’d filled out, I’d mentioned GB Road in my address. I was rejected based on that. This particular school didn’t even bother to go through my CV or take a look at my certificates. Just because I live on GB Road doesn’t mean that I partake in what makes this area infamous.

“This one time, when I was in Class 10, this man who had been guiding me since I was much younger, made sexual advances towards me. He used to stay very close to my hostel, and would always call me ‘bachcha’. Clearly, he didn’t value the term and what it meant. When I objected, he said to my face that he didn’t think I’d have a problem with him making a pass at me because, again, I ‘belong to that place’. I yelled at him left, right and center. The only thing that was left for me to do was slap him.

“Jobs, education are all a challenge. Our background haunts and threatens us with rejection at every step in our lives. However, I am very hopeful. Education has proved to be a very important tool with which I can prove myself and beat the stigma attached to belonging from a red light area. I am grateful to Lalithaa Ma’am for having enrolled me into a school. Had she not sent me away from here to study, I would’ve probably been consumed in the same profession as my mother. Not only has education promised me a better life, it has also empowered me to pull my mother away from this life.”

– As told to Tania Goklany. She met Deepika at Society for Participatory Integrated Development’s (SPID) SMS Center for Children of Women in Prostitution on GB Road. *Local NGOs estimate that 4,000 women are currently employed as sex workers in over 100 brothel houses on GB Road, Delhi’s biggest red light area.