The academy aims at holistic development of children. They’re given academic tutorials, football lessons and taught the value of discipline and hygiene. “I’m helping them build their lives on the foundation of knowledge, discipline, punctuality and teamwork. They should be able to achieve whatever they aim for in life on merit. How is one to respect himself or command respect if he begs for a living?” Sylvester Peter, the founder of the academy, asks rhetorically. 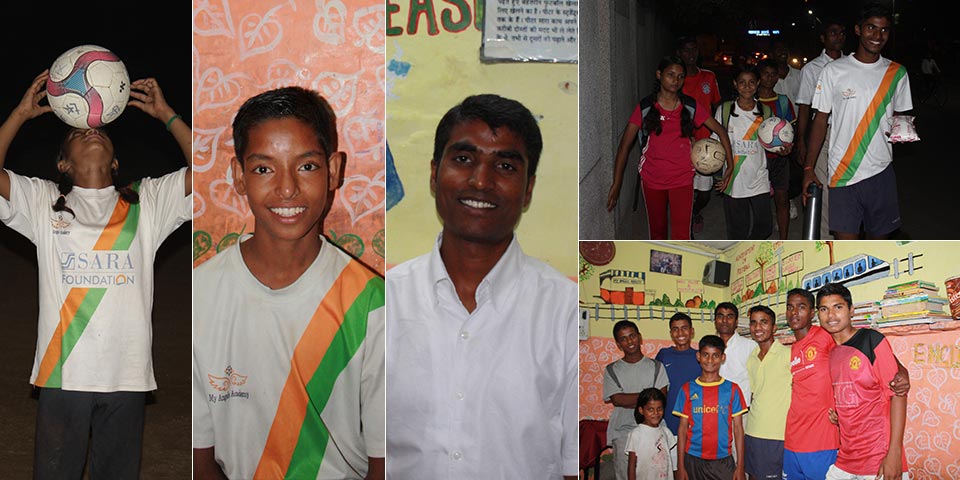 Written by Tania Goklany on September 30, 2015 | Education: Against All Odds

I didn’t know what to expect of an academy situated bang in the middle of a slum with a 4-feet narrow lane with structures on either sides accommodating way more people than it could afford to. Much like the strong stench from the garbage piled up at the entrance of the village, one could sense the looming despair.

After crossing multiple faces whispering to each other, or sitting on the sides of the lane smoking beedis, I finally arrived at the academy. It was a small room with no windows, a few broken plastic chairs, and a table with a few books and computer sitting on it. Called My Angels Academy, this room is almost home to about 140 children from this slum in Delhi’s Vikaspuri.

With smiling faces and glinting eyes, a handful of about nine children sit cross-legged listening to Sylvester bhaiya, the founder of the academy, open up to me about his ambitions and achievements. The bright yellow walls, painted by the angels – as the children are fondly referred to as – encapsulate a sense what gives meaning to their lives. Painted on one side is a portrait of Sylvester bhaiya smiling in between a few framed newspaper articles on the academy. On its opposite side, above a shelf with a number of notebooks, is where they have painted the aim and roadmap of the academy as they see it. The wall boasts of the achievements and employments the teetotaler-angels have landed so far, and of a bigger residential academy with their own football field. In stark opposition to the looming sense of despair in the village, there are abundant dreams and hopes floating in this room. 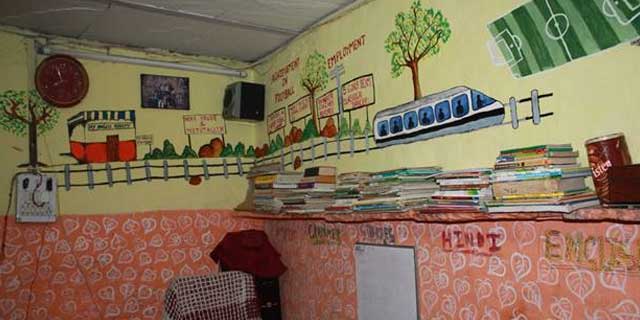 The academy aims at holistic development of children. They’re given academic tutorials, football lessons and taught the value of discipline and hygiene. “I’m helping them build their lives on the foundation of knowledge, discipline, punctuality and teamwork. They should be able to achieve whatever they aim for in life on merit. How is one to respect himself or command respect if he begs for a living?” Sylvester asks rhetorically.

On being prodded by Sylvester bhaiya, Tabrej, who was so far sitting in the middle of at least 10 footballs, comes forward and talks about how the academy runs with the aid of a register. “Classes are held daily between 2pm and 10pm. Each angel, part of the core team, has to teach a batch of junior angels. Sometimes, when a child asks me a question I can’t answer, I ask my seniors and then clarify it in the class. There’s a notebook where all of us teachers maintain a log of the topic we taught and in what time slot; we sign against it. One of the students has to validate all that the teachers have filled in and sign against it. This way, we make sure each and every one of us is accountable for our work. If a teacher’s signature is missing, he/she is assumed absent. Rahul, another angel, is currently responsible to take the absent teachers to task. As punishment, the rugs and mattresses have to be washed by the absentee teacher. Or the absent students for that matter”, he says with an air of confidence. There’s a separate register where teachers mark the attendance of all the students attending the class.

“We don’t learn anything in (the government) school (we attend). On an average, we’d probably end up having about 2 classes out of 8 on a regular school day. We just sit and chat, or play and while away our day. Whatever we learn, we learn at My Angels Academy. The only reason we still go to school is because Sylvester bhaiya cannot provide us a school passing certificate”, adds Tabrej.

He then proudly introduces me to the Clean Diary. It carries details and signatures of all the children who cleaned up which parts of the academy through the day. “The academy is cleaned four times a day – morning, afternoon, evening and night”, Tabrej says. Each and every article in the room is thoroughly dusted, the walls brushed, and floors swept and mopped. “It takes about 15 minutes since the responsibilities are distributed amongst 4-5 angels”, he adds. An appointed supervisor overlooks the cleaning activities and signs to legitimize others’ work. They work in rotation to hone everybody’s leadership skills. It should be noted here that it isn’t usually Tabrej who gives the brief on how the academy is run; his seniors want to encourage him. 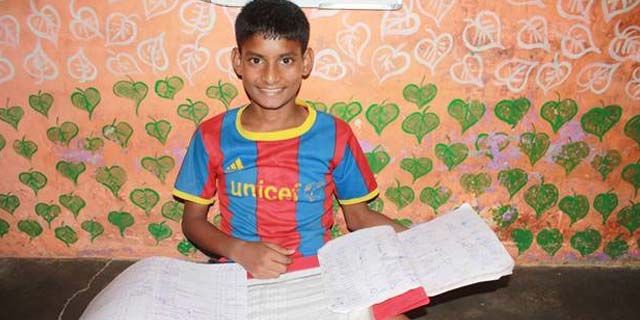 In addition to academics, children here are being taught responsibility, accountability and self-respect. One of the tools being used to instill discipline in them is football. What better way to teach values to children than via sports? “A playground is a leveler. All I want for these kids is an opportunity. Nobody’s rich or poor, fair or dark on the playground – what matters is skill”, says Sylvester Peter. One of the boys, earlier a rag picker, got selected to train at Liverpool International Football Academy. Two more flew to France to play for the FC Metz Club. Chance, that’s all they need.

Most of the senior angels collect sharp at 4am in the playground nearby to practice football. Later in the day, after school, the younger ones practice till late evening. A few angels are even earning by refereeing and coaching at various events and schools respectively. “Each child that takes a football to the field needs to sign against the time he/she took it away and when it was brought back”, says Tabrej.

Their overall performance in sports, studies and nutrition is taken note of in the Remarks Diary. Their sports coach for the day marks them in running, exercising and playing; the teacher marks them on their academic performance and the overall marks are added to gauge their performance out of 10. There is also an account of how many glasses of water each one of them has – because a lot of them wouldn’t drink water after playing for hours – and the food they ate through the day to make sure they’re consuming nutritious food. They take pride in not eating junk food, because fitness is pertinent to their training in extra-curricular activities – a lot of the girls are also being trained in Bharatnatyam.

“Sylvester bhaiya and this academy have given us hope, motivated us to lead better lives and made us who we are today”, says Tabrej. The self-managed academy is funded mostly by Sylvester; a few academy seniors donate about 30-50% of whatever they’re earning.

Even though the academy was officially registered in 2009, Sylvester has been attempting to provide better quality of lives since he was 13 years old. Over 1,000 children have been associated with the academy at some point or the other in over 29 years of its functioning. “I hope to expand the academy into a residential one in the coming years and reach out to as many underprivileged children as I can”, Sylvester says.