Let’s stop the blame game right from today and truly believe that we can empower our teachers. And that they have the infinite power within themselves to create a magical moment in school and community. 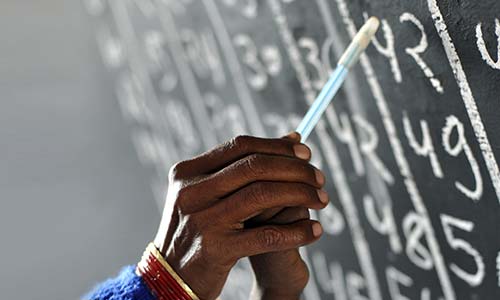 “Welcome O Life! I go to encounter for the millionth time the reality of experience and to forge in the smithy of my soul the uncreated conscience of my race.”

Today morning on 5th September 2015, children in 14 lakh classrooms will go vacant without a teacher due to shortage. Add the probability of 1 in 4 teachers being absent (as research by Kartik Muralidharan in India indicates), 21 lakh classrooms will not have a teacher present in the classroom. That leaves, 64 lakh teachers who are walking into school today to celebrate their vocational choice, a day commemorating the birth of a great teacher Dr. Sarvepalli Radha Krishna. Out of these, I would have to loved to make a valid claim on how many walk into school with the spirit of the James Joyce opening quote. My intuition from have been associated with K-12 education in India for the last 6 years is less than 10%, still a staggering number of 6.4 lakh brilliant teachers across the country.

Of course, our first impulse will be to fix blame within the system and a natural scape goat is the teacher herself or the governments.  Some governments are attempting to place CCTVs in classrooms, backed by serious economists advocating for it. My first reaction to that intervention is to question the moral courage of researchers to attempt the same intervention with our Parliamentarians. Won’t that be a better solution to our myriad problems with politics and governance? Let the citizens play Big brother with their representatives!

However, I want to resist my temptation to fix the blame on actors within the system. As renowned system theorist Peter Senge remarks in one of his system laws, there is no blame in the system. People and organizations like to blame, point fingers and raise suspicions about events, situations, problems, errors and mistakes. Sometimes we even believe the blame we throw around. In reality, we and the cause of events, situations, problems, errors and mistakes are all an integral part of the system.  Philosophically speaking, the doer and the process are not separable.

During my TeachForIndia Fellowship in Pune, I was placed in a low-income private school in Wadgaonsheri. I taught all subjects in 3rd and 4th grade to 32 kids over the two years. When I started, my children tested at KG on literacy skills and early Grade 1 in their numeracy skills, i.e., they were already 3 years behind their grade level skills and competencies. I was obsessed with bridging the gap in the first year. During the summer of my first year, I watched the Lion King Broadway Musical in New York and was blown away by it. It was my first musical experience and it felt magical. I made a commitment to organize the exact musical, word to word with Elton John music and mobilize the entire primary school community around this vision. I also wanted to use the musical as an instrument to cultivate practice of values that we signed off in ‘Happy Harvard Class’. We named our class on two values I deeply believed in – pursuit of internal happiness and scholarship. It was a wonderful journey for 11 months that involved decorating the class with Lion King Towels, artefacts, student paintings; weekly reading and reflection circles on the book; integrating Simba, Pumba and Timon into every math word problem; writing workshops on themes like shame, responsibility, and power; raising 2L rupees which included 14k raised by 3rd and 4th graders themselves from within the community; scouting for choreographers and thermocoal prop artists; using waste material and Plaster of Paris to build sets on stage; and finally managing 1000 people that included children in an open theatre on the D-day. As the curtains went down, I saw tears in the eyes of many audience, including TeachForIndia CEO Shaheen Mistri, Rajya Sabha Member Anu Aga and all my parents. They could not believe that kids who could not speak a word of English two years ago could do the full 90 min musical at this level of excellence. I have worked in senior leadership positions after the Fellowship, but haven’t been able to create the joy of that moment. As Pirsig says in Zen of Motorcycle Maintenance, the only Zen you find on the top of the mountain is the within yourself. Everything else in my life dissolved in that moment of pure joy and Zen. I go back and talk to my kids and their parents regularly. We still talk about that moment and what that year meant to them. That’s the power of being a teacher. Even a PM or President can create that moment for a child with all their authority.

Today is about celebrating the millions of teachers who are creating the uncreated conscience of my race in India and across the world. The 4th grade teacher who told Dr. APJ Abdul Kalam to have wings of fire. Ramakrishna Paramahansa who shaped the prodigy that Swami Vivekananda was into a global icon. Ramakanth Achrekar who gave my childhood idol Sachin Tendulkar to the country and made my growing up so memorable.  The teachers who took Sundar Pichais, Satya Nadellas and Indra Nooyis of India to the top of corporate world. And the teachers who are shaping the artists, poets, saints, scientists, doctors and teachers for the future generation.

Let’s stop the blame game right from today and truly believe that we can empower our teachers. And that they have the infinite power within themselves to create a magical moment in school and community.

Tarun Cherukuri is a TeachForIndia Alumnus(’09) and is the co-founder and Project Eklavya lead at Indus Action.