The Digital Way to Empowerment 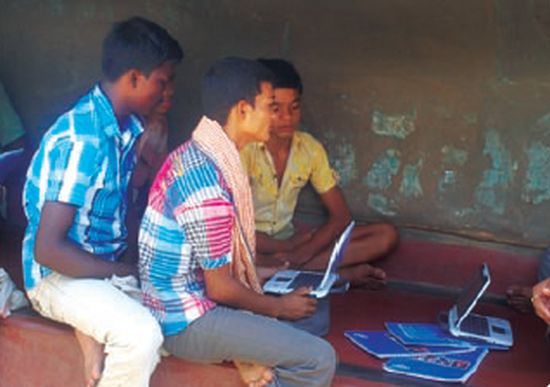 Kali Prasad Samantaraya, a tribal youth from Orissa, has seen his life change for the better, and is now enabling the same for many, many others.

Kali Prasad Samantaraya is a tribal youth from Manikpur village of Banpur block in Khorda district, Odisha. In a village that reels under abject poverty, he belongs to a relatively affluent, landowning family. After completing his graduation in 2005, he found himself in an odd situation indeed when he returned to his village: there were no jobs for an educated person like him! Nor could he work on his family’s land, as it is considered unthinkable for a landowner to be working in his own fields. “Getting an education felt like a mistake!” he remembers.

Sitting at home doing nothing, Kali Prasad stared at a bleak future. Time passed, things remained unchanged, and he became depressed. Then, in 2010, things took a turn for the better. His zeal to learn took him to eKutir, a social enterprise that works for rural empowerment. He was fascinated by the work it was doing to help farmers. He started working at eKutir to enable the development of agriculture in his village. Seeing its positive impact on farmers, Kali Prasad was so energised that he signed up for an executive MBA program. In early 2011, he was at eKutir’s Bhubaneshwar office. In a conversation with the Managing Director of eKutir, he mentioned the digital literacy needs of rural communities. Before
he knew it, it was arranged for him to learn computer basics at an eKutir office near his village. Thus started a chain of events that would transform his life beyond imagination! Kali Prasad went on to attend a two-day Intel Learn Easy Steps training program in New Delhi.

“The program was conducted very well, and was very easy to understand. It changed everything for me. The trainers of Intel Learn Easy Steps motivated me, a village guy, who was doing nothing,” he says. Kali Prasad is now designated Program Head, Odisha, Intel-eKutir Digital Literacy Program. “Today, I help other people in my neighbourhood become digitally literate,” he says.

He encourages farmers and their families to become enroll for the course by demonstrating how computers can be useful to them. For instance, he shows them how to find and use information on fertiliser management and seed selection, and how to use market pricing information while trading their produce. This is a significant improvement from the days when the farmers were ignorant of prevailing market prices, and so earned less than they could. It’s not just farming where this digital literacy program has made an impact. Kali Prasad helps villagers use it as a tool for their other needs as well. They learn about how to get their land records and births and deaths registered, make payments, and purchase commodities that are not easily available in nearby areas.

Intel Learn Easy Steps is thus opening avenues for the people of Odisha. Kali Prasad has already spread the program’s reach to four districts of Odisha. He often has to travel over 100 km a day, but does not mind it one bit. “If required, I will travel all across Odisha, so that more people can be helped through Intel Learn Easy Steps,” he says.

POLL OF THE DAY