Irrigation – The Need of the Hour

India’s agriculture is still hostage to the vagaries of nature, with 60% of the sector dependent on rainfall. So when rain fails for two consecutive years like it has, it is a full blown crisis for the country’s farmers. 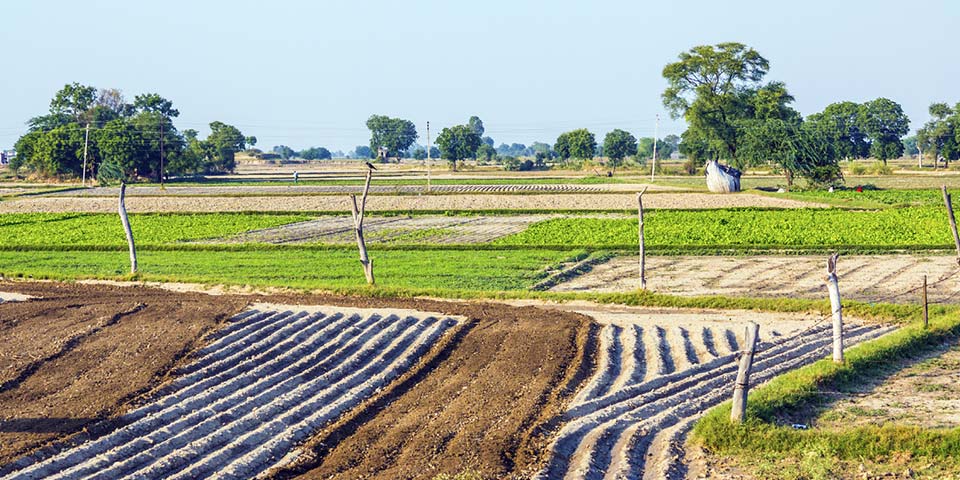 India’s agriculture is still hostage to the vagaries of nature, with 60% of the sector dependent on rainfall. So when rain fails for two consecutive years like it has, it is a full blown crisis for the country’s farmers.

Coupled with the dependence on nature and the shortfall thereof, the consumption is high. India uses 2-4 times more water to produce a unit of major food crop than China and Brazil do. Between 2002 and 2008, the country consumed more than 109 cubic kilometres of groundwater, double the capacity of India’s largest surface water reservoir, the Upper Wainganga. Apart from the shortfall in rain, adding to the woes of the sector, is India’s declining water tables.

The need of the hour is investment in irrigation. A state-wise breakdown of share of output vis-à-vis irrigated land in case of different crops shows up some broad trends.

In case of Wheat, states like Uttar Pradesh and Punjab which are among the highest contributors to the national output of the crop – are well irrigated. Some of the other major contributors like Haryana, Bihar, Madhya Pradesh and Rajasthan are partially irrigated. The remaining states of the country which are largely unirrigated contribute very little to the overall wheat output.

In case of paddy too, Uttar Pradesh and Punjab which are well irrigated are the highest contributing states to the national output. Remaining paddy producing states like West Bengal, Bihar, Odisha and most other states that contribute anywhere between 0-10% of the country’s paddy production are partially irrigated.

But the lack of irrigation is more pronounced in case of pulses, where except for Punjab most of the states where pulses are grown are either not fully irrigated or are totally unirrigated. The dietary pattern across the country is shifting to proteins which imply that the demand for pulses is rapidly increasing. It is imperative that we improve irrigation across the country to increase the production of pulses.

Recommendations in the Economic Survey

This year’s Economic Survey recommends the use of micro-irrigation methods like drip irrigation to conserve water and increase production.

In drip irrigation, perforated pipes, or valves are placed either above, or slightly below ground that drip water on the roots and stems of plants directing water more precisely to the crops. An efficient drip irrigation system reduces consumption of fertilisers and water lost due to evaporation. It also results in higher yields than traditional flood irrigation.

This technology is rather costly to set-up and needs maintenance. However, this fixed cost can be recovered by the increase in yields and savings due to reduced use of power and fertilisers.

An evaluation of National Mission on Micro Irrigation (of the Ministry of Agriculture, Government of India) conducted in 64 districts across 13 states where Drip irrigation was used reveals less wastage of resources and increase in the yield of wheat by 45%, gram by 20% and soybean by 40%.

Here’s what Finance Minister Arun Jaitley announced in his budget speech to improve the irrigation system:

– 28.5 lakh hectares will be brought under irrigation under the Pradhan Mantri Krishi Sinchai Yojana

– A dedicated Long Term Irrigation Fund will be created in NABARD with an initial corpus of about ₹20,000 crores.

– A major programme for sustainable management of ground water resources has been prepared with an estimated cost of ₹6,000 crores and proposed for multilateral funding.

– At least 5 lakh farm ponds and dug wells in rain fed areas and 10 lakh compost pits for production of organic manure will be taken up by making productive use of the allocations under MGNREGA.