How Mobile Penetration, Social Media are Gradually Changing the Face of Agriculture

With the surging sale of smartphones and its rapid penetration into rural areas, mobile phones are becoming one of the most effective ways of helping farmers. 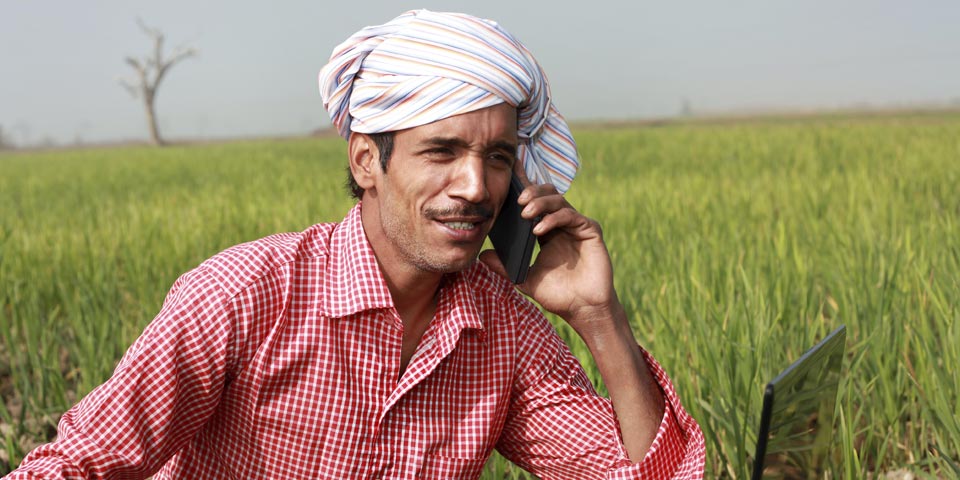 Preetam, a 42-year-old farmer based out of Indri village in Madhya Pradesh’s Mandla district, has 4 acres of land in which he used to produce about 40 quintals of paddy. He sold his produce for about Rs. 1,000, lesser than what the government was offering for the crop at the Minimum Support Price (MSP) because, as a small farmer, he wasn’t part of the cooperative society that ensures farmers get the MSP assured by the Centre.

Preetam and his family’s lives have taken a change for the good ever since he subscribed to the services of EkGaon.

He and his wife would take up additional work as labourers because his income from farming wasn’t adequate to support his family of five. Today, neither he, nor his wife work as a labourer thanks to the assistance of EkGaon, a Delhi-based technology and management services company.

EkGaon helped Preetam reduce his cost of production by 30-40%, and increase his income from farming by 50%. On the company’s advice, he switched to better quality seeds which helped him cuto down his costs 800 times. From 130kgs of paddy seeds that he would buy earlier, he came down to using 15kgs without compromising his output. In fact, his production went up by 60 quintals from which he now makes a profit of approximately Rs. 30,000.

His two biggest achievements since he has been associated with the company have been to pull two of his children out of government schools and enroll them in private ones, and buy a silai machine for his wife to be able to work in the comfort of their home to make some extra money.

With a swirl of repeated disasters like droughts, unseasonal rainfalls and hail in the past few years, the farmers are increasingly relying on technology and turning to each other for help to reduce their distress, and save their crops and livelihoods.

The OneFarm advisory services provided by EkGaon aims to do exactly that, help farmers. “The information service being provided is based on ‘when I need’ delivery model”, says Vijay Pratap Singh Aditya, the CEO of EkGaon, adding that “we hand-hold farmers during the cropping season”.

Once a farmer subscribes to the services, for which they have to pay Rs. 150 per cropping season, EkGaon advises them at every step by telling them what seeds they should opt for, what fertilisers will work best for their soil type, etc. This information is customised for each farmer depending on the region he belongs to. “Disease alerts, soil nutrient management, weather forecast, market prices, etc. are all sent via text messages, and voice calls to farmers in local languages”, Aditya says. So far, they have managed to help cultivators across 465 villages in Tamil Nadu, Madhya Pradesh and Chhattisgarh.

Another such initiative that is helping the farming community is the Digital Green programme by M.S. Swaminathan Research Foundation (MSSRF). In light of the depressing number of suicides in Maharashtra’s Vidharbha region, MSSRF rolled out a programme called Mahila Kisan Sashaktikaran Pariyojana (MKSP) in 2008 to empower women farmers, says Kishor Jagtap, Project Manager at MSSRF, adding that the Digital Green model comes under this programme.

Jagtap believes that the Digital Green model, that disseminates demonstration videos of best farm practices, “is one of the most effective tools to train the community. It helps increase the adoption of different sustainable agricultural practices. It also trains women farmers on their legal rights and entitlements”, he adds, since the target audience of these videos is women. The videos show women farmers talking in Marathi and demonstrating step-by-step how to go about farming.

The first demonstration video was published in January, 2014. Since then, they have pushed 15 videos to over 3,265 female farmers who are associated with MSSRF. “MSSRF has a strong network with women farmers in 60 villages of Wardha and Yavatmal districts of Maharashtra.  We also have a strong cadre of trained Community Resource Persons (CRPs) who disseminate the videos as and when the women farmers need it”, he adds.

With the surging sale of smartphones and its rapid penetration into rural areas, mobile phones are becoming one of the most effective ways of helping farmers. Tapping further into this platform, Jayalaxmi Agro Tech aims to bridge the information gap to assist farmers with their produce.

Jayalaxmi Agro Tech has developed apps for 25 crops in multiple regional languages. “Since no farmer grown more than 2-3 crops in one field, and not every crop can be grown in every place, it is illogical to provide information to farmers that they have no interest in”, says Anand, co-founder of Jayalaxmi Agro Tech, adding that excess data also makes the app very heavy. Making numerous apps which are crop specific or language/region specific was a conscious decision in order to overcome the issues farmers may have faced in using or accessing them. “Multiple languages in one app are also a major bottleneck”, he adds.

“As of today we have touched the lives of 60,000 farmers. We are reaching farmers at the speed of one download every 6th minute, and, interestingly, 90% of the downloads are not through the internet. We are hoping to touch one farmer every minute by end of 2016”, Anand says.

In addition to the apps, they have also built an agri pole device as an alternate way of reaching out to farmers given that internet access in rural areas is extremely sketchy and erratic. It is a small, pole-like device which can store and transmit the apps to smartphones through Bluetooth. This way the farmers don’t need internet at all. “This small device can be fitted in anywhere in a village. One village only needs one such device. Any farmer who has smartphone can then download our apps”, Anand says.

Many farmers have also taken to social media platforms like WhatsApp for advice and consultation. Anil Bandawane, who was once an engineer student, formed a group called ‘Baliraja’ with about 100 farmers in January, 2014. “I wanted to help my fellow farmers. Almost everyone is part of some or the other WhatsApp group, why couldn’t we have one that helped farmers? I wanted to form it much earlier, but I didn’t have enough contacts”, says the 27-year-old farmer from Pune.

He finally got contact numbers of farmers from a Facebook titled ‘Baliraja’ and formed the group by the same title. ‘Baliraja’ is a term used for farmers in Maharashtra.

Today, there are eight WhatsApp groups with 256 members each. “When I formed this group, the maximum number of people that a group could accommodate was 100. Now, we can include 256 people in a group”, Bandawane says, adding that the group includes farmers, and agricultural experts for advice. Of the eight groups, seven include farmers from across Maharashtra who communicate in Marathi, and one includes farmers from outside Maharashtra and communicates in Hindi. They also made a Facebook page recently to reach out to more farmers. Here are a few screenshots of how dialogue alone has assisted farmers:

The government has also been doing its bit in the space of communications and technology to reduce the distress of farmers. They launched a toll-free helpline no. on January 21, 2004, in 25 different locations with the aim of providing guidance to farmers in local dialects on all aspects of agriculture and allied subjects like animal husbandry, livestock, fishery etc. Called Kisan Call Centres (KCC), farmers can dial 1800-180-1551 for counselling between 6am-10pm on all seven days of the week. One can also register to their website or advisory messaging service for assistance.

Perhaps this technological revolution is the need of the hour and needs to spread at a more rapid pace to boost our agricultural sector and help farmers cope with rural distress.