How Collective Farming Can Help Solve the Agrarian Crisis

Andhra Pradesh Rural Inclusive Growth Project (APRIGP) mobilizes farmers as producer groups to share knowledge on better agriculture practices, support each other in using cost-effective agriculture technologies and eventually market their produce at better prices as a collective. Many might think that this sounds too good to be true. I hope you would be able to believe the power of this process by the time you finish reading this post. 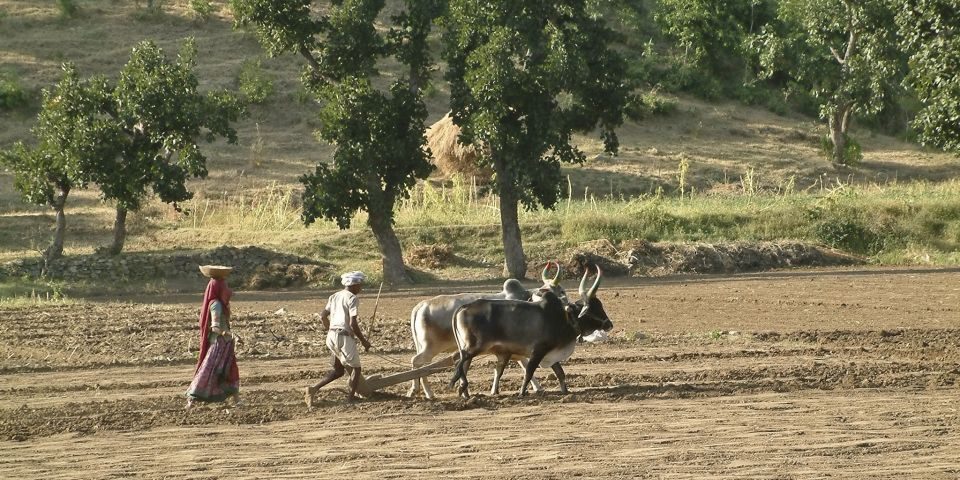 Andhra Pradesh Rural Inclusive Growth Project (APRIGP) mobilizes farmers as producer groups to share knowledge on better agriculture practices, support each other in using cost-effective agriculture technologies and eventually market their produce at better prices as a collective. Many might think that this sounds too good to be true. I hope you would be able to believe the power of this process by the time you finish reading this post.

Digital Green has been working with Society for Elimination of Rural Poverty (SERP), which is a part of APRIGP program, since 2011, to amplify its non-pesticide management (NPM) extension. SERP works in 150 of the most backward mandals (revenue blocks) covering all 13 districts of Andhra Pradesh.

Digital Green uses its video-based information dissemination model to support SERP in its effort to popularize NPM in agriculture at the community level. Now, as part of APRIGP program, SERP’s Community Managed Sustainable Agriculture (CMSA) Unit is entrusted with the responsibility of mobilizing farmers to form farmer producer groups. A producer group is an institution at the village level that brings farmers onto a common platform to make collective farming activities for improved livelihoods possible, while also keeping in mind collective interests of the farmers.

Building such an institution must follow a well laid-out procedure and also ensure farmers understand the motive behind formation of such producer groups. For this, SERP thought that Digital Green’s video-based extension system would be a suitable method. Farmer producer groups, as a concept is quite new within India, barely a decade old.

When this was proposed to the Digital Green team we could see the immense benefit it could provide the farmers and making a video on farmer cooperatives and disseminating it at community level also seemed very possible. But, innovative farmer producer groups are rare to find at the community level. So we wondered how to make an instructional video. We could either work with professional actors to demonstrate producer group formation or make a documentary listing out all processes in the formation of a farmer producer group; until we hit upon a better plan.

Centre for Collective Development (CCD), a non-profit organization working in Anantapur and Chittoor districts of Andhra Pradesh and in Adilabad district in Telangana has been organizing farmers into cooperatives and federations since last ten years. Its cooperative federation Sri Satyasai Raithu Paraspara Sahayaka Sahakara Parimita Samakkhya had organized groundnut farmers in Anantapur district. SERP and Digital Green approached CCD to help us in making a video on farmer producer group formation. CCD agreed and connected us to farmers in Settipalli village in Penukonda block, Anantapur district.

When we arrived at a community-gathering place in Settipalli for a briefing meeting, nearly 100 farmers had assembled at the scheduled time. Perhaps it was a manifestation of a cooperative work culture – meetings, schedules, consensus, and working together. We briefed them on the kind of video we were going to make and why. They were eager to support us in making the video. Settipalli groundnut farmers cooperative (named, Ramaswamy Raithu Paraspara Sahayaka Sahakara Parimita Sangham). It’s president Sudhakar Reddy played a big role in motivating his fellow farmers in the meeting, “Being a part of farmer producer cooperatives has reaped many benefits for us. Let us advocate our model to many others to follow,” he said.

Settipalli is a beautiful village situated among the hills. Of its nearly 3,000 strong population, 90% are small farmers cultivating groundnut as a major crop, however the area is arid and water for irrigation is very scarce. The farmers there believe a rain during the sowing season is a blessing from heaven. Most of them wake up at 4 in the morning, milk their cows by 6 am and take it to the village milk collection centre, come back home to take cattle for grazing, return home by 10 am from fields and have a light meal and wait for electricity. Like any other Indian village, electricity supply schedules determine their work hours in Settipalli. The day we reached Settipalli for video shooting, the electricity comes at 10 in the morning. Gopal Reddy, a farmer and actor in the video told us he had left his fieldwork to participate in the shooting. We needed about 100 farmers and had just about 50 farmers. Looking at this, Gopal Reddy and other farmers went house to house to gather people for our shoot. They really went out of their way to ensure the making of this video and soon we had a gathering of nearly 100 farmers to help us make the video.

Dialogue after dialogue were delivered and scene after scene was shot, the production team worked non-stop for nearly 7 hours. Observing the shooting cues, a little boy who was tending to his cattle close by, fed some fodder to his cow and said to the cow “one, two, three – action”. A burst of laughter rung out at the shooting site.

Working with the farmers was a pleasure. The breadth and depth of their discussions and the solution orientation gave us more than a glimpse into the fact that they knew exactly what factors contributed to their problems and how they could be tackled. We realized that all they needed was some support to organize. The kind of support CCD offered them in the beginning.

When we returned to Settipalli after a month for a patch of shooting, farmers were in despair that a recent hailstorm has spoilt their groundnut at harvest stage. Sensing a doubt and with hesitation, we asked them for their time. They agreed without batting an eyelid and cooperated in shooting. Perhaps it’s only the strength of a farmer – looking at what they can do despite the despair. When we showed them the final video after a month, we could see a sense pride in the eyes of the Settipalli farmers.

This video is now being disseminated in every district of Andhra Pradesh. Thousands of farmers who have watched the video are captivated by what the Settipalli farmers have discussed and shown in the video and are eager to follow in their footsteps.