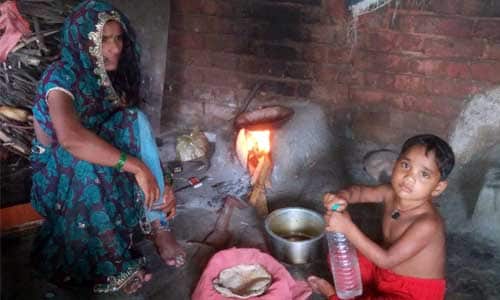 Every day, 30-year-old Ramrati lights wood in a chulha, a customised cemented opening in her makeshift home, to cook food for herself and her family. She recently moved to Greater Kailash-1, an area considered ‘posh’ in Delhi, because her work brought her here.

She works as a cement mixer and doesn’t stay in one place for too long. So, a swab of cement to a wall of every makeshift home she moves to, acts as her cooking spot. She usually collects wood and twigs from nearby areas to burn for cooking. Sometimes she buys the fuelwood from a furniture factory.

As the wood begins to burn, a cloud of smoke rises and floats out of her shanty. Her youngest son, aged 7, starts coughing and it becomes progressively worse until she asks him to go out and play with the other children.

Ramrati is one of the 142 million rural households, which is almost 85% of total rural households — that burn solid fuels like wood, cow dung or crop waste, for cooking. The soot generated in the process has been casting black shadows on the lives and health of people in these households.

According to a global comparative risk assessment organised by the World Health Organisation (WHO), solid-fuel soot accounted for about 2.6% of illnesses worldwide in 2000.

Women and children are the worst affected. Here are a few statistics that will leave you alarmed:

– Over 800 million people in India are affected by indoor air pollution, mainly caused by smoke from burning solid, according to a report by the Global Alliance for Clean Cookstoves.

– About one million deaths occur annually in India due to household air pollution, according to a report by The Lancet Respiratory Medicine Commission.

– About 25% of the 4.3 million global premature household air pollution (HAP) deaths occur in India every year, according to World Health Organisation estimates. The main contributor to household pollution is the smoke released by cook stoves

– Nearly 39% of early neonatal stillbirths were attributed to cooking fumes, according to a study by the National Center for Biotechnology Information that examined the relationship between biomass fuel-use and stillbirths in India.

According to a report by the United Nations Environment Program, more than half of the black carbon in South Asia comes from incomplete combustion. Black carbon is a serious threat to the melting of glaciers and of significant concern in South Asia due to its potential impact on the Himalayas.

So, the use of solid fuel for cooking causes ambient air pollution and emits some of the major contributors to climate change.